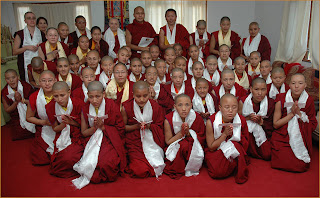 I Will Do It

Llundup Damcho reports on the Seventeeth Karmapa’s vow to reinstate full ordination for women in the Tibetan Buddhist tradition.


The Seventeenth Gyalwang Karmapa stunned an international audience in Bodhgaya last winter by making an unprecedented declaration of commitment to ordaining women as bhikshunis in the Tibetan Buddhist tradition.when there would be bhikshuni ordination in the Tibetan tradition, he leaned forward and said, in English, “I will do it.”

As applause broke out, he cautioned against expecting quick results. “Be patient,” he said. “Be patient.”

This proclamation by Ogyen Trinley Dorje, the Seventeenth Karmapa, was groundbreaking, for it was the first time that a Tibetan Buddhist leader of this stature had publicly committed to personally making bhikshuni ordination available. His declaration came after intensive research into the feasibility of establishing full ordination for women according to the monastic code that regulates Tibetan Buddhism. More broadly, it reflected the Karmapa’s dedication to addressing women’s issues, especially regarding nuns.

At present, women in Tibetan Buddhism may take ordination as novice nuns (Tibetan: getsulmas), but they do not have the opportunity to take the highest level of ordination that the Buddha created for women: bhikshuni, or gelongma, ordination. While full ordination for women is available in Chinese, Korean, and Vietnamese traditions, and has recently been reestablished for nuns in the Sri Lanka Theravada tradition, Tibetan Buddhism lags behind in the movement toward providing equal spiritual opportunities to women.

For several decades, the Dalai Lama has consistently spoken out in favor of bhikshuni ordination, but progress toward that goal has been incremental, consisting mainly of conferences and discussions. The Karmapa’s acceptance of a personal role in extending the opportunity of full ordination to women is a decisive step forward on a path that the Dalai Lama first asked Tibetan Buddhists to traverse.

The Karmapa traces his involvement with the bhikshuni issue to the time when he instituted new discipline rules for monastics attending the Kagyu Monlam Chenmo. “We were deciding how to organize the gelongsand getsuls, and there were some gelongmasfrom the Chinese tradition. Then we needed to think: Where do they sit? How do we make arrangements for them?” Since that time, bhikshunis have been given a prominent place at the annual Kagyu Monlam events in Bodhgaya, with special invitations issued to bhikshunis.

As well, the Karmapa has taken on the task of translating a volume of biographies of Chinese nuns from Chinese into Tibetan. While that project is ongoing, he also has plans to translate a collection of narratives of the lives of Buddha’s direct female disciples from the classical literary language of the Tibetan canon into colloquial Tibetan so the examples of these early nuns’ lives are more accessible to modern Tibetan readers…/.