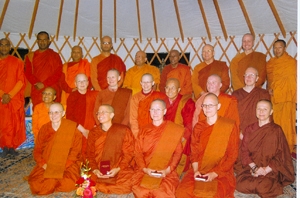 Last Wednesday marked a historic occasion in the Thai Theravadan Buddhism. For the first time in the Western hemisphere, women were fully ordained as bhikkhunis (Buddhist nuns) in the Thai Forest tradition. Sylvia Boorstein, founder of Spirit Rock Meditation Center and Tricycle contributor, attended the ordination and later reported on the events on her Huffingtonpost blog. Boorstein explains the history of female ordination:
Although the Buddha ordained both monks and nuns, the order of nuns disappeared a thousand years later when it became clear that there were no nuns available to ordain new nuns. Keeping strictly with tradition (and in keeping with patriarchal pressures) the rule that nuns needed to be ordained by nuns brought the order of nuns to an end, and women were able to join a community and practice in only an inferior status. The pressure brought by women ardent to practice and have roles and recognition comparable to men has enabled some women, trained in the Theravada Thai tradition, to be ordained by nuns with Sri Lankan ordination. The nuns ordained Sunday join the now small group of recognized bhikkhunis in the Thai Forest tradition that can now continue to grow.
Boorstein goes on to say that though many non-Buddhists are unaware of the exclusion of female monastics, Wednesday's ceremony marked a pivotal victory for all marginalized groups of women:
It's probably fair to say that not many people outside of Buddhism have been aware of the exclusion of nuns from equality in monastic practice in the Theravada tradition. Nevertheless, I felt the event as an epochal one, and not only for women in Theravada practice. Each time equal opportunities are afforded to women where they had not been before, each time gender barriers are eliminated and women are emancipated, all women benefit. All people benefit. The world is made more harmonious.
For more on female ordination, read "Ordination as Equals," by Victoria Rue from the Summer 2009 issue of Tricycle.
Publié par Bouddhisme au feminin à 00:50